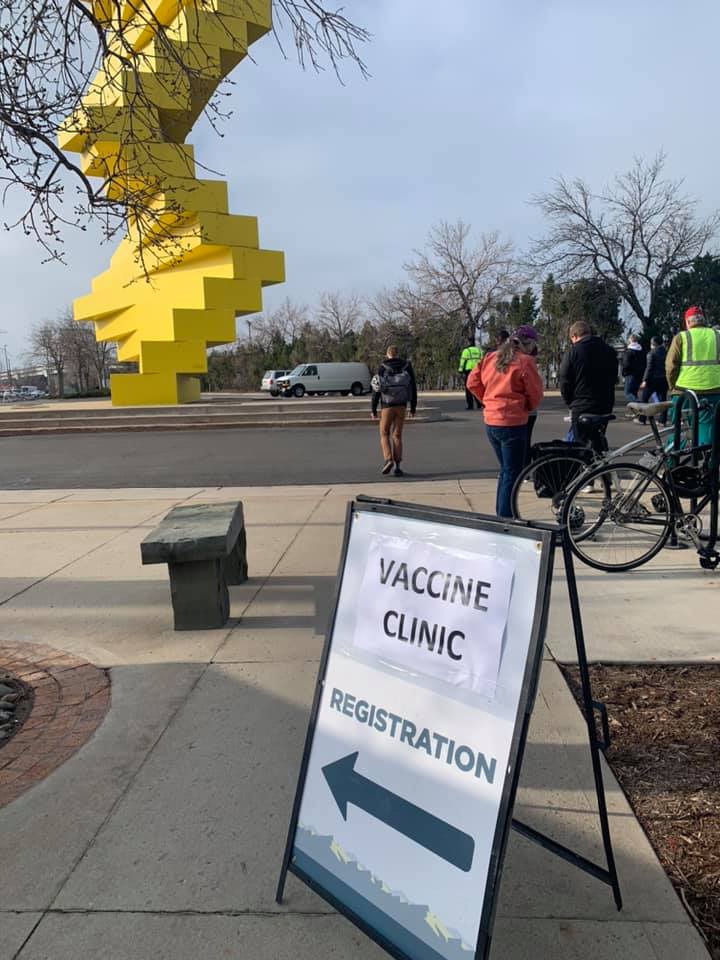 To begin our blog series, we would like to highlight heroes in the community that have been there for the cause of multi mobility. These difference makers are the people that make Denver a great place to ride and make our city better for all.

Our first difference maker is Luchia Brown. A volunteer on behalf of a multimodal vaccination clinic located in the Denver Design Center last weekend, Luchia sat down with me to discuss her experience.

Loren Hansen: Walk me through how you got involved volunteering at the Denver Design District vaccination site.

Luchia Brown: Maggie Thompson, from Jolon Clark’s office, reached out to me originally to help coordinate distribution of flyers to Baker residents announcing the clinic. I saw that they were still short-handed on volunteers as the day approached, so I signed up and conscripted my husband and my ward to help out that day. My job was helping at check-in.

LH: What was the overall mood at the site? If you have worked at others in the past, what was the mood in comparison to others?

LB: The mood was generally happy; however, someone forgot to bring the box where all the used sharps went, so we were delayed about 45 minutes while someone had to go get them. That wasn’t too fun, but once we got going, things went quickly and we caught up by about 10:30am.

LH: How impacted was the site throughout the day? What was the general amount of bicycle riders to transit users to cars to pedestrians?

LB: Most of the sign-ups were for the early morning and toward the end of the day. It was pretty slow during the middle of the day. In he beginning, many people walked over from West Washington Park. (Many of the volunteers, including my group, rode their bikes to the site.) A few people showed up on their bikes to get their shots. A few showed up from the Alameda light rail station, which caused us to put a sandwich board sign over at the station. The site itself was fantastic in its ability to accommodate multi-modal arrivals. A lot of people wanted to park their car and go to the walk-up site to get their shot rather than idle in their cars.

LH: Are there any memorable moments that happened throughout the day?

LB: A couple that are similar. The security guard who works the area didn’t have his shot, so we got him and then he called his wife and friends to come down. Another guy showed up from a nearby construction site, then he called all his co-workers to come over and get their shots. The Blue Bonnet restaurant sent their employees over to get their vaccine. We had about 400 appointments and roughly 200 walk-ups. A good chunk of the walk-ups were from the Spanish speaking community, which was heartening.

LH: How efficient was the site throughout the day? If you could change things to be better, what would it be and why?

LB: The site itself was incredibly efficient. The only issue I saw was with the data collectors. They showed up late and then tried to get people who had already registered online to provide more info on paper. When they held up the line, we just let people through because people getting their shots was more important than them getting their data. They also had their own technical issues and finally relented and just collected people’s names who had already registered to check them off later.

LH: If you could have future sites similar to the Denver Design District, where would you want them to be and why?

LB: It seems like we’re getting past the point of needing massive vaccine clinics. We had 1000 appointments but only filled 400, even after heavy promotion. Having smaller clinics at various light rail stations would be helpful. Also, I’ve been hearing that if you got one of the shots at one location, you will be able to get the second one somewhere else as long as the person has their CDC vaccine card that shows which vaccine they got.

To find a vaccine site near you, check out the COVID-19 website for the state of Colorado here. The Toyota Camry Lot at the Ball Center vaccination site is known to be bicycle friendly.

*Featured image is a sign leading to the vaccination clinic*