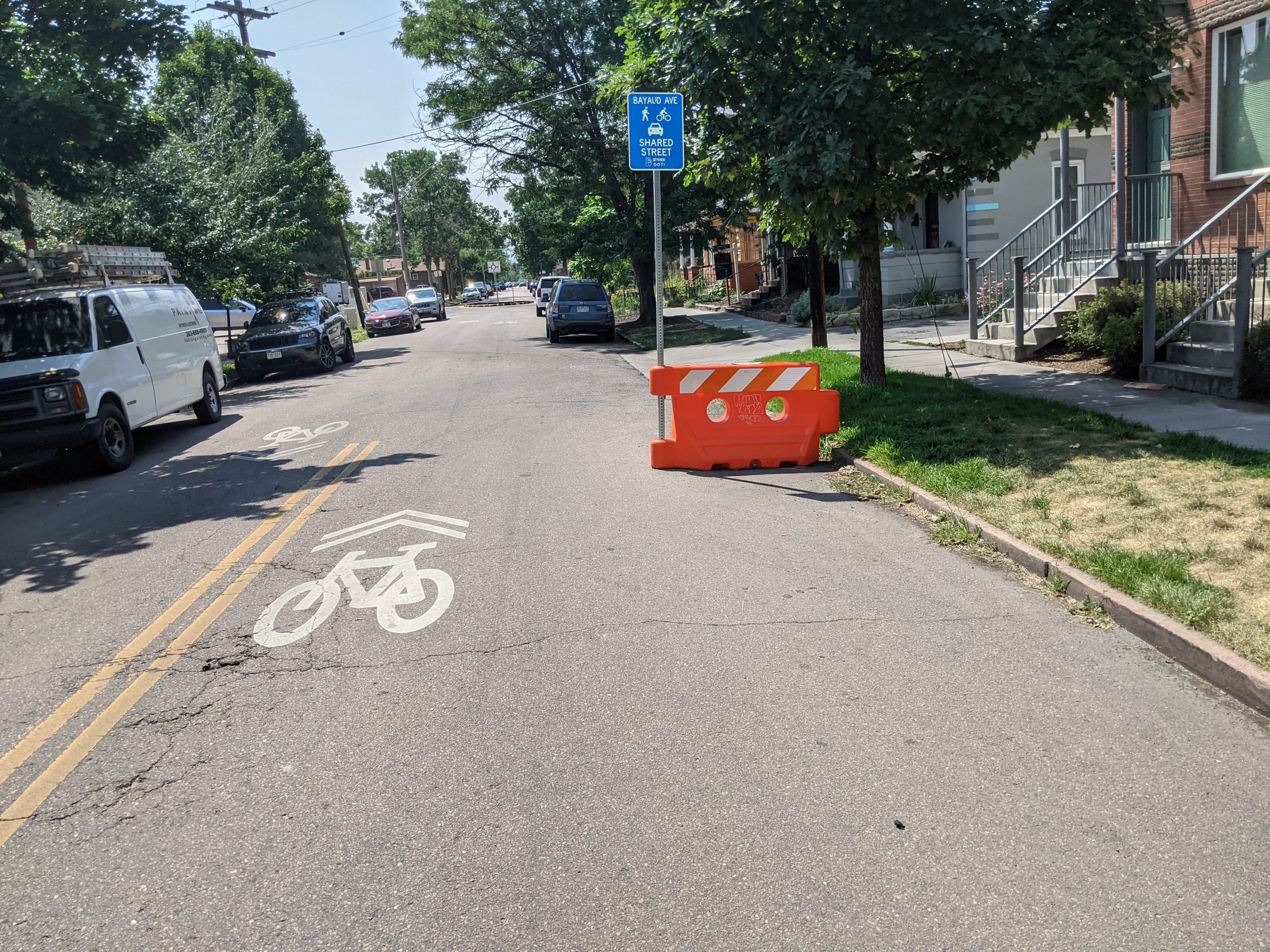 As the hottest days of the summer grind on, I have been trying to explore more of the options that the Denver metro has, food, drink, and otherwise. To me, Broadway is emblematic of these things, having everything from a men’s underwear store (NSFW) to a well known rooftop patio.

This past Sunday, I decided to take a ride on the Bayaud Ave Shared street after helping a nearby friend move, given that I needed to snag groceries from the Safeway on Alameda.

After helping a friend move some furniture on Clarkson, I double backed to Downing Street and took a left unto Bayaud. While in the past I have started slightly earlier in the afternoon for my reviews, time constraints made it so I was delayed until about 3 PM. Additionally, while I tried to document as much as I could, my phone overheated and shut off.

As I headed towards Broadway, the biggest things that I noticed were twofold.

While this may be a function of the fact that the section of Bayaud is harder to access by car due to the adjacent Marion Parkway being shared street as well, it was a welcome sign as I headed westbound.

As I hit Washington, I noted that the curb extensions could potentially be something welcoming for pedestrians, but didn’t think much of it because it didn’t seem like traffic was heavy, which felt odd in a few ways. I passed through, noting that only a handful of cars had gone by me.

As I was approaching Pennsylvania, the barricades that typified my last two experiences on shared streets appeared. Rather than being something that narrowed traffic, they acted as a monolith as little car traffic outside of the occasional vehicle passed by me.

As a sidenote, beyond myself there were few active people not in cars out and about, owing itself probably to the heat more than anything else.

After passing the outdoor dining area on Pennsylvania, I kept heading east. The left picture above is an image that is the typical ingredients to a Shared Street: Sharrows, Signage, and Barricades.

To me, those in their entirety had less impact than the Traffic Circle up ahead. Even less so than another piece of infrastructure: bollards blocking off the entirety of the street to traffic from Lincoln Street.

While I was unable to get a good full photo of the bollards that Sunday, I have an earlier photo I took in the winter, along with the bollards from two angles.

To me, this was the closest it felt like to be in a high-comfort bicycle facility outside of being in a protected bike lane or a separated trail. Blocking off major intersections to only local traffic kept the area fairly tame, and the fact that it acted as a connection from the Washington Park area to Baker and South Broadway is incredibly appealing to a rider like myself. The one improvement I would suggest would be to get rid of the temporary barricades, as they seem to force everyone towards the center of the street in unsafe ways. This street embodied what I think helps build competent multimodal connections: restrict cars from using it.

*Featured Image is a section along the Bayaud Shared Street*