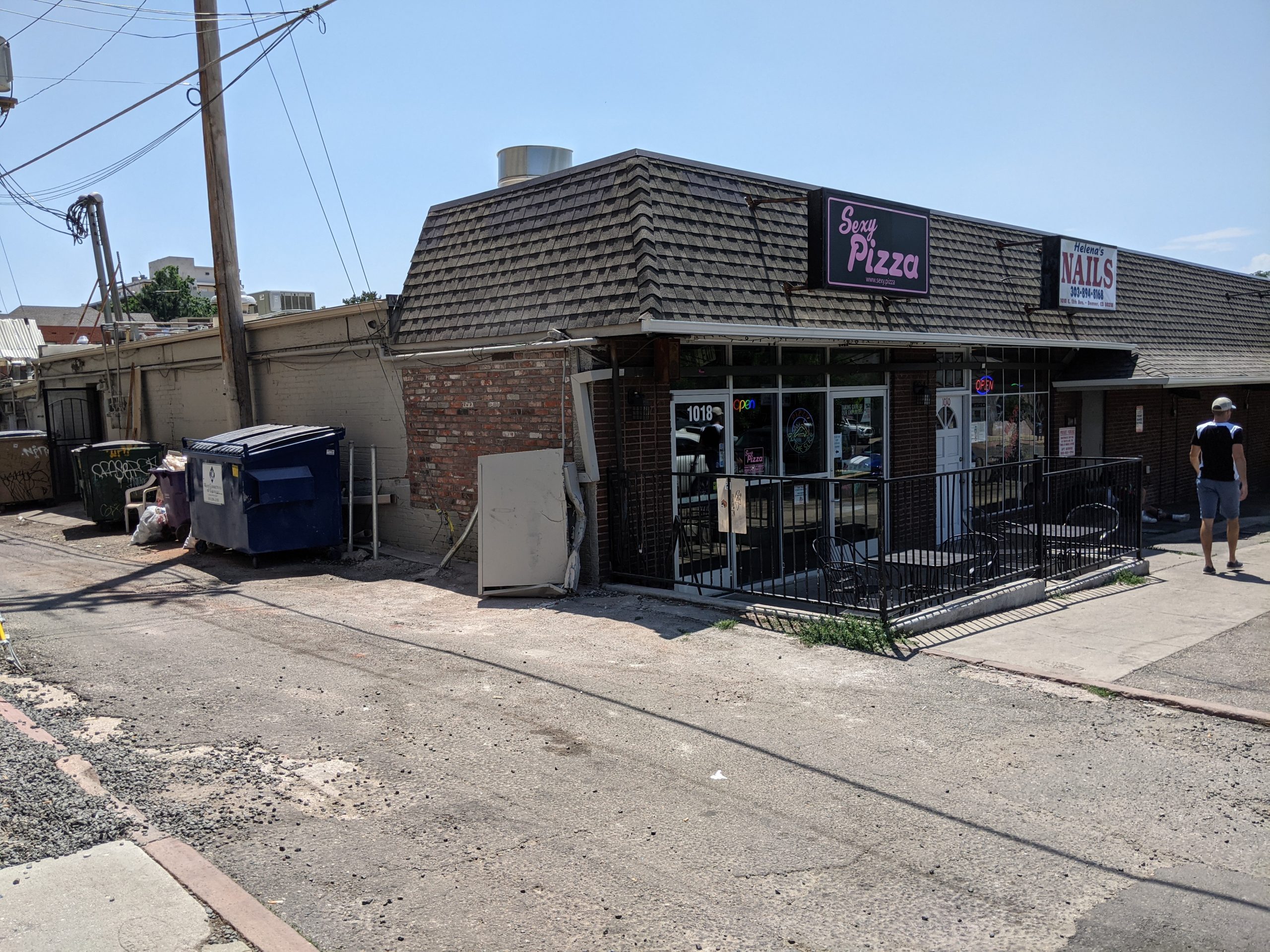 Back in early July, I was going to do a review of the Shared Street just north of Sloan’s Lake. However, recent events, most notably the closure of a Sexy Pizza location after a driver ran a dumpster into the side of the building, warranted a review. While Sexy Pizza is open again as of last Friday, many multi-mobility activists asked the relevant question: if a building distinctly off the Shared Street can be in danger of being damaged, how does that bode to the people that use the Shared Street on a daily basis? I set out to answer this question this past Sunday.

Rather than do a West-East approach, I exited Cheesman Park from 12th, turning on Humboldt before riding along the street bound towards the Golden Triangle area.

The one notable part about the east-most end of the shared street from a cyclist perspective is the fact that the turnoff into Cheesman Park on 11th is much more suited for pedestrians. Noting that, I started heading west

Heading west, I immediately noticed that the roundabouts on 11th seemed significantly more established than the blockier, orange barricades on 16th. To an extent, it actually did feel like it slowed down car traffic. The westbound route is a slight downhill, with mostly residential buildings surrounding it along with a handful of businesses.

Compared to the 16th Shared street, it felt like there was a slightly larger amount of people in the streets. From runners looking to use the asphalt to their advantage, to rollerbladers using it as a major thoroughfare, the amount of life on 11th Avenue on that early Sunday afternoon seemed almost commendable. It was around the time that I passed Sexy Pizza that I started to notice a change.

Sexy to Emerson, or, the Danger Zone

I intentionally set out to be on this street in early afternoon, mostly in the hope that car traffic would be heavy as people were heading to lunch and leaving brunch at the various businesses along the corridor. What I found at that point in my ride, particularly along Ogden, was increased car traffic in relation to the fact that there was abundant street parking near the various businesses along the corridor. Human traffic had basically vanished as well, with most people on the sidewalks rather than brave the streets. The higher amount of traffic that was known to signify that element of 11th ramped up around that time, making me feel a little unsafe and hesitant to stay and grab more photos.

Emerson to Logan: Or, the Disappearance

As I started heading towards Downtown, much of the main infrastructure associated with the shared street seem to slowly disappear and shrink. The more robust roundabouts closer to Cheesman gave away to the smaller ones, with the street entirely disappearing by the time Logan is hit. To navigate to where I needed to go (the King Soopers on Speer), I had to go up 2 blocks to Sherman and 13th and take a protected bike lane until I hit Speer.

While the 11th Ave Shared Street had a lot more great places for pedestrians to access, the design once you get to the heavily trafficked corridor from Corona to Emerson is incredibly concerning given it does little to separate riders from motorists. For that stretch, I could see a protected Bike lane being useful as a mechanism to improve the street design. The biggest flaw in design from a rider’s perspective is the lack of direct connective tissue to the 13th Avenue protected bike lane, a valuable resource that is a major west-east connection in Denver. To me, the closest equivalent is the 15th Street Protected Bike Lane, which ends at Larimer Square and offers little guidance beyond sharrows to get from Downtown to the Lower Highlands.

So, how could the street be saved to save Sexy Pizza from getting hit again? Reduction of car usage along it, from taking away parking immediately along it to putting in infrastructure that discourages driving would be two tangible first steps. While to many who see parking as a right, I choose to believe that I am telling an inconvenient, important, and unsexy truth.